A Systems approach to team success: Lessons from the Thai cave rescue

Home/Coaching - Team or One to One/Team coaching/A Systems approach to team success: Lessons from the Thai cave rescue
Previous Next

Recently I worked with a team who are working to deliver a joint project together.  They had a project plan, actions and Leads for each area.  Good progress was being made.  Then an unexpected absence by one Lead meant that certain actions weren’t completed, and the project fell behind.

I was curious about this from a Systems point of view.

In Systems work, Roles belong to the system (team in this case) and not to individuals.  So, the role of performing this Lead task belonged to the system rather than the person who took it on.

What’s interesting is that when the system was disrupted in some way, the role was not taken up by anyone else in the system, with consequences for the project.  Systems are regularly disrupted for a variety of reasons:  People joining or leaving a team, sickness or accidents, new information or priorities, etc.

So, I wondered about what had happened in my client team when their system was disrupted and came up with some options which I later explored with the team.

And then I wondered what would have happened, or perhaps DID happen, in the recent case of the Thai cave rescue.

In that situation, there was one clear and unifying purpose for everyone involved:  The safe rescue of the 12 boys and their coach from the caves.  And it was highly compelling: Lives were at stake, and heavy rainfall was imminent, the world was watching.

There were different roles in the system involved in this, and the Independent stated that in total 10,000 people participated, including 2000 soldiers, 200 divers and representatives from 100 government agencies.   From the diving team, to the medical care, to the engineers who pumped water away or out of the cave system, to the logisticians who coordinated the equipment and teams to manage the rescue.  Local volunteers got involved in filling other roles:  Food provision, local children helping to test the full face masks in local swimming pools, moving equipment etc. 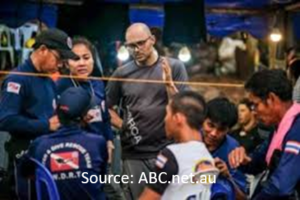 Each of these is an Outer Role in Systems Coaching.  They belong to the system or team and are populated or occupied by individuals. Many of the individuals were highly skilled at their role – a classic example is the cave diving experts from around the world including Thai navy seals.  Others just saw a role that needed fulfilling, stepped in and did it.

And yet that wasn’t enough to prevent the death of one Thai Navy Seal in the days leading up to the final rescue.

But what happened after this tragic loss of a team member?  In my client example, work on the project in a specific area stalled.  In the cave rescue, the team purpose was still unifying and compelling, and someone else will have been brought in to fill the role that had been left vacant.  What would have happened if this had been different?  The whole rescue could have stalled, with disastrous consequences.

In the Thai cave rescue, alongside the grief at the diver’s tragic death, the focus on the team purpose was relentless. The role he had occupied was taken on by someone else and the rescue continued.  Three other divers were hospitalised when their air tanks ran low during the rescue.  When bringing out the 11th member of the boy’s team, the diver lost hold of the guide rope and in pitch black had to backtrack to try to find it again, delaying him and his precious cargo by nearly an hour.

With every setback, the team worked together to solve the problems, stepping in to fill the formal and informal roles that were needed to get the job done.  The incredible result of all 13 being successfully rescued was one I certainly didn’t expect.  And it’s a wonderful example of how a team, with no prior ‘team building,’ but a clear mandate and purpose, relentless focus on the team’s (vs. individual’s) result, creativity in approach, flexibility in how they went about getting the job done despite setbacks, can be spectacularly successful.

With the team I’ve been coaching, we explored what had happened and why. It transpired that they did think the project purpose was clear, compelling and unifying enough and in fact each had taken great ownership of their various actions and tasks.  Where they had fallen down was as the disruption (unexpected absence of a team member) hit the system, they hadn’t come together to come up with a contingency plan.

Knowing that disruption is inevitable, I facilitated a discussion about how they wanted to handle it in future, and they came up with a 5-point action plan:

I’ll be following up with the team in a few weeks to see how they’ve done.

How clear are you on your team’s purpose?  How compelling and unifying is it?  What could you do to make it more so? And how willing are you to put the team’s goal ahead of your individual goals and priorities?  Finally, how do you handle setbacks that occur due a temporary or permanent change in the team personnel (remembering they are just occupiers of the various roles the system requires)?

If you want some help working on this with your team to make it even more successful, drop Phoenix a line – it’s our speciality and we love to make a real difference to team performance.

Source for much of the details of the Thai rescue is from this article:

Jo is the founder and lead facilitator for Phoenix Training & Coaching Ltd.  Phoenix works across a wide range of organisations and sectors with the aim of bringing humanity to work and driving performance, by working with leaders, managers and teams who want to shift gear and be more effective.